On Tuesday 19th February, Mrs Denison and Mr Nash travelled to Warners Bridge for the year 5 and 6 Hockey Tournament. In the morning a team of 11 made up of 4 girls and 6 boys played in the emerging group. Which consisted of 8 schools with 3 games organized for each school. With the rain pouring the team were eager to get playing, the first game was a bit of a challenge as both teams had very similar kit; both in black and yellow. Out of the 3 games the team played they lost

On Thursday 8th February, Mr Nash and Miss Jones travelled to The Federation of Greenways School with the boys’ football team to play their fourth game of the season. The boys got off to a great start by maintaining possession, pushing up the pitch followed by some close shots and good saves from Greenways keeper. The boys managed to score in the first half, finishing the half 1-0. In the second half to boys continued to work well as a team, the boys had to put their defensiv

Before we broke up for the half term our Year 6 girls played two league games. The first was against Chalkwell on Thursday 25th January where we won 5-0 after waiting for the rain to stop, and then Head of Chalkwell School sweeping the puddles off the court. The second game was against St Michaels who we managed to beat 8-1 with superb team play and excellent shooting. Well done girls. 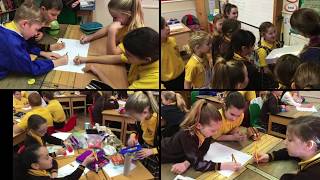 On 8th February 2018 the children enjoyed an exciting morning where they came together in their house teams to design and create a new eco mascot for the school. The idea was put together by our eco warriors during their meetings. The aim of the project was to raise the profile of eco across the school and it certainly did raise awareness as each team discussed issues such as pollution, litter and wasting water. The teams were mixed across the school which allowed children of

During Year 3’s visit to Colchester Castle, they begin their learning about the Romans. To begin with, the pupils went down underground, into the foundations of the temple of Claudius. During this part of the day, the children learnt how the Romans invaded and looked in detail at their weapons and armour. The children re-enacted the roles of the Roman soldiers vs the Celts. They learnt that the Romans won because of their superior tactics and weaponry. As they moved through

On Wednesday 31st January West Leigh competed in both the Year 3/4 and 5/6 Sportshall Athletics at Garons Tennis and Leisure Centre. The day was split into 2 parts with Years 5 and 6 competing in the morning and Years 3 and 4 competing in the afternoon. With each competition consisting of 6 track events and 6 field events, each athlete is also only allowed to compete in a maximum of two track and two field events. In the morning year 5 and 6 performed consistently throughout

On Monday 29th January, Mr Nash and Miss Fletcher travelled to Hamstel Junior School with the boys’ football team to play their second league game of the season and a friendly. In the league game, the boys played a superb game of football with both teams applying pressure throughout; there were some close shots at goal with some great saves from both keepers. At the end of the first half, the score was West Leigh 1-0 Hamstel. In the second half, the boys continued to push for

On Wednesday 31st January we took a team of 23 Year 6 pupils to compete in the borough sports hall athletics. This was a massive event; the biggest school sports hall athletics competition in the whole country and Southend is also one of the best sporting boroughs in the country. There were some fantastic performances throughout the morning and I was exceptionally proud to be the member of staff responsible for our young people. The way they conducted themselves both whilst c